Konza was planned as a mixed-use, high density walkable city that accommodates a diversity of programs and districts. By avoiding superblocks and auto-orientated roadways, Konza will be a livable, sustainable urban environment that encourages high-value development and discourages sprawl. Planning will take cues from successful global urban centers, yet be specific to the needs of Kenya and the region. The master plan sets the framework for a city that functions both globally and locally, today and in the future. These concepts of livability, density, and walkability have been incorporated in the Local Physical Development Plan approved by the Ministry of Lands on February 2013.

The master plan follows a “stitch” framework, composed of a mixed use “bar” that runs east- west off Mombasa Highway and is intersected by a series of program “bands” that run north- south. These bands include a university, residential, science and tech, and an office band. The intersection of the bars and the bands create vivid connections, where special programs and higher density occur. These intersections become points of interest that seed neighborhoods of distinct character. The stitch master plan also contains a series of neighborhood parks, located throughout the city with varied orientations. Most parks are connected to the green boulevard, a 60 meter parkscape and public transit corridor.

The development of the Konza master plan will be monitored by the Konza Technopolis Development Authority. The authority has entered into a 99-year lease with the Central Government of Kenya and will have the authority to sublease parcels to developers, finance the build-out of the public infrastructure, and package incentives to attract investors and tenants. 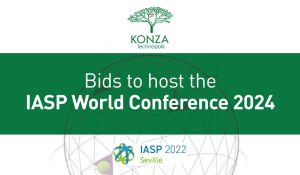